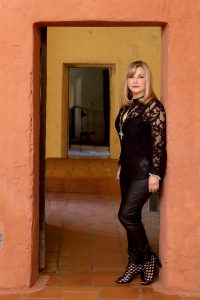 Connie Spenuzza MSEd., received First Place from the International Latino Book Awards for her novels Lucia Zárate (2017), Missing in Machu Picchu (2013) and Traces of Bliss (2012). The Association of American Publishers and the Las Comadres International organization selected her novels to the National Latino Book Club. Foreword Reviews selected Lucía Zárate as Indie Book Finalist, Parisian Promises (2014) was the runner-up for the Paris Book Award and Gathering the Indigo Maidens (2011) was a finalist for the Mariposa Award. She has written and designed three children’s bilingual fables. Olinguito Speaks Up received the endorsement of the Smithsonian Institution. Her pen name for the works above is Cecilia Velástegui. Connie’s travel memoir Jubilant Journeys (2019) was awarded second place as the ILBA’s Most Inspirational book 2019, coming after the book by Nobel Peace Prize nominee José Andrés.

Connie was born in Ecuador and raised in California and France. She received her graduate degree from the University of Southern California, speaks four languages, and has traveled to 125 countries. Among her numerous philanthropic endeavors, Connie has served on the board of directors of the Segerstrom Center for the Arts, the historic Mission San Juan Capistrano Preservation Foundation, the Bowers Museum, and the California Museum for History Exhibit on Latinas: The Spirit of California. In 2018 Connie received the Women Who Inspire Award from the International Women’s Year. Connie donates the proceeds from the sale of her books to the fight against human trafficking. She lives in Dana Point, California.