This is a gem of a book, exquisitely produced and poetically written. No surprise that the author is an award-winner.

Lucía Zárate is the poignant story of Mexican-born Lucía Zárate. At 20 inches tall and just four pounds in weight she remains world’s smallest woman. She made her debut at the Philadelphia Centennial Exhibition of 1876. For a few short years, when performing midgets were a popular entertainment, she was the toast of America and England for her coquettish singing and dancing performances.

The story is mostly told through the voice of Zoila, Lucía’s madrina (godmother) and self-appointed protector who educates and cares for the tiny person as though she were her own. Zoila is a wonderful figment of Velástegui’s imagination – she is from Paplanta, the vanilla-growing region of Mexico, rich with tales of the wrath of the chaneque (evil spirit). Recognising that Lucía was clever, Zoila taught her English and educated her in current affairs, but mostly she cared for her. Her charge had a feisty temper, a sense of her own worth and a love of beautiful clothes and jewellery.

The story is one of the exploitation of the vulnerable with the connivance of poverty-stricken parents, ruthless managers and agents taking advantage of their charges and currying favour with the press. It is full of period details and locations, a seedy backstage look at the front-of-house glamour.

The text is sprinkled with real people of the time – there’s an identifying asterisk against these names – such as P. J. Barnum, the American showman who employed Lucía for a short time; Tom Thumb, the tiny man who became a millionaire and committed suicide, the Prince and Princess of Wales, the American president. Reading, you hope against hope that the outcome will be happy – that Zoila will realise her dream of spiriting Lucía back to Mexico…

A pleasure as the book is to read, in my opinion it would be improved with tighter editing, cutting out repetition, and correcting the few typos.

Austin Business Journal: The Odyssey of the World’s Smallest Woman

Boston Business Journal: The Odyssey of the World’s Smallest Woman

Prensa Mexicana: The Odyssey of the World’s Smallest Woman

With Lucia Zarate, award-winning author Cecilia Velastegui has woven a beautiful tale of the late1800s, when superstition still abounded and life was both freer and far more dangerous. It was a time when that which was strange and unusual was exploited for profit. It was into this world that our eponymous Lucia Zarate was born. She was a tiny thing, standing the height of a two-year-old though she was twelve.Effectively sold by her family to a “Yankee” agent, Lucia was destined to travel around the world that people might gawk at her diminutive frame. In her home region, Lucia was considered to be “chaneque,” one of the wee folk said to be mischievous river sprites. Truly, it was better for her family to send her abroad.

The story is told mostly from her guardian, Zoila’s, point of view, and it is with her circumstances that we begin. Aged twenty-five and unmarried, Zoila is put in rather dire straits when her father dies and his webof lies becomes exposed. As an interpreter and vanilla-trader, he had brokered double-sided deals and breached his own supposed code of linguistic ethics, making promises that would never be kept. When he died, he owed a substantial amount, and that taint passed to Zoila. With the death of her one friend and secret love, Felipe, and being considered a top suspect in a murder she had nothing to do with, Zoila is sent all the way to Veracruz, where she is lucky enough to discover a unique position that would make use of her sharp mind, her cleverness and knowledge, and the many languages her father taught her. In short, she would travel with Lucia, being her chaperone, to keep her safe and to teach her.

At first Zoila desired to abandon Lucia once in the US. After all, getting to the States had been Zoila’s primary concern. Upon seeing the treatment Lucia received, though, she stayed on. Years passed in the sideshow circuit, with Lucia touring first with Frank Uffner and later with PT Barnum briefly. She traveled throughout the US, UK, and Europe, meeting queens, presidents, and other important figures. Lucia became rather full of herself and had numerous conflicts with other troupe members. She was incredibly extroverted, possessed of a playful nature and sharp intellect. A decade passed thus, and her prestige slowly waned. She died shy of age 30, not far past Donner Pass in California, like that ill-fated party so long before, victim to theSierras’ fearsome winter weather.

Velastegui has woven a most interesting biography, full of rich, lyrical imagery. I had never heard of Lucia Zarate and found her life fascinating. Insights into just how grueling sideshow work was floored me. These people were treated to terrible conditions and crude mockery as if they were not human at all, at times. They were poked and prodded as “medical curiosities” and “missing links,” called freaks and made to entertain audiences for a pittance while their so-called managers raked in cash.What petty beings are we…

Not only did I learn of Lucia Zarate and gain a greater appreciation for the full nature of exploitative behavior toward the more unusual among us, the anthropologist in me was treated to a glimpse of Totonac culture and vanilla cultivation. Threaded through the story is beautiful symbolism tied to seemingly ordinary events, connecting things like the lore of the owl to the Totonac and what is presaged for Felipe, the flutist Birdman, and later for Lucia herself.

I enjoy reading authors of other cultures because culture surely shapes writing. It echoes values and reflects sociocultural frameworks. This was my first experience with both Velastegui’s works and a Latina author. It comes as no surprise to me that this book should have been among the finalists of the 2017 International Latino Book Awards.

Lucia Zarate really existed, renowned as the world’s smallest woman. Zoila, the voice of common sense, is her godmother, mentor, and friend. Over the first chapters we are introduced to Zoila and her sad background in rural Mexico, a scene paving the way for a series of adventures beset with cruelty and connivance. She is reluctantly still living surrounded by the region’s vanilla orchards but the redolent scent is not in keeping with her yearning to escape her father’s unkindness. For years he has mocked Zoila’s unbecoming appearance, stressing the likelihood she will never find a fitting suitor. When he dies, despite all his brags of riches, he leaves her virtually destitute.Without money, but with plenty of spirit and a fine business sense, Zoila leaves home with a vial of her dead lover’s blood and a few vanilla beans concealed in the cleft between her breasts. When she hears about the tiny 12-year-old girl, her maternal instinct swells and she resolves to help the tiny girl escape the superstitious surroundings where she is regarded as a chaneque or sprite. They make a brave twosome. Zoila acquires fake papers that take them to New Orleans, where aYankee agent is all too ready to find a quirky new performer. Before long, Lucia is taken under the wing of a dastardly impresario, Francis Uffner, who, with lasting dishonesty, vows to make Lucia and Zoila rich. Together, they all go on the road–intermittently accompanied by Lucia’s father, who hopes to put away money to set up his own business in Mexico. For a while, Lucia is compliant, even happy, dressing up in pretty and sophisticated clothes that might fit a doll, dancing on stages set up for displays of mini-people, enjoying her audiences’ applause. But as the years pass, she becomes less enamored of her status and more fearful that brujos or sorcerers are pursuing her.

By the time she reaches her early twenties, she has spurned Zoila, suffered a nun satisfactory romance with one of her fellow performers, and recognized that her appeal is waning. PT Barnum has arrived on the scene and his cast of performers are pushing Uffner’s sideshows away.

The highlight of Lucia’s travels, and of the book, is a last hurrah touring England. All are invited to meet Queen Victoria and other members of the royal family. An intended honor becomes an embarrassment when Lucia is impertinent to the monarch and is whisked back to the States. Uffner, intending to make his fortune exploiting the poor little woman, sees his potential wealth evaporate.

Cecilia Velastegui’s historical novel succeeds on several fronts. Right away readers recognize Zoila as the author’s alter-ego and can perceive her intense sympathy for the small ape-woman and other “freaks” in Uffner’s entourage. Her extensive research results in a remarkable story, identifying real-life doctors and scientists of the 1860s and 1870s and supporting the saga with newspaper articles gleaned from numerous archives.

Today’s historical novels tend to include modern expressions in conversation, both adding and diminishing the legitimacy of the story. Here, the language is relevant and weaves in several Mexican folkloric expressions. After the narrative and an epilogue, readers are invited to answer a series of questions and musings to stimulate their memory of a distasteful form of entertainment.

A word for the colored end pieces – they are quite beautiful and add a delightful touch to the book.

View the Article and Interview >>

Listen to the Interview >>

Cecilia Velástegui’s historical novel, Lucia Zárate, chronicles the extraordinary life of the tiniest person who ever lived. The opening pages, lyrical and riveting, paint Mexico with vivid brushstrokes, bringing the sights, sounds, and smells of Veracruz and its vanilla bean industry to life.

Like all historical fiction, Lucia Zárate plaits fact and fancy. Lucia Zárate (January 2, 1864–January 15, 1890) holds the Guinness World Record as the smallest human, measuring twenty-one inches tall and weighing less than five pounds at seventeen years of age. Velástegui describes her as “a wisp of a girl, a perfect and miniature thing, whose singular appearance and sparkling personality were as unique as the cherished fragrance of Veracruz vanilla.” Despite her diminutive size, she “spread the velvet folds and lace frills of her gowns in such a way that she extended her personal space in a wide circle all around her.”

Incorporated into the fictitious elements are actual newspaper accounts of Lucia’s nineteenth-century tour of America and Europe. Sometimes these factual reports are artfully woven into the tale; other times, not. As a result, the book wavers between pure history and historical fiction, never landing squarely on either one.

Lucia’s story is told primarily from the vantage point of her governess, Zoila. When Zoila realizes she must extricate herself from her village’s internecine vanilla bean trade skirmishes, as well as from the rumors swirling around her own perhaps-nefarious actions, she tucks a vial of her beloved Felipe’s salvaged blood between her ample breasts and heads out. She secures a position as governess for the improbably tiny Lucia, whose parents have contracted for their daughter to perform in human curiosity sideshows. Zoila accompanies the Lilliputian girl on the decade-long tour, with visits to domestic and foreign heads of state, as well as considerable time spent among seedy denizens and gawking voyeurs.

Lucia and Zoila are well-drawn and complex figures; their emotions ebb and flow according to the particular circumstances they encounter, making them believable characters. Other individuals, however, are less fully developed; they include slimy carnival hucksters, cruel freak-show managers, and greedy parents who want to live in luxury, financed on the back of their tiny treasure of a daughter.

This sad life story is intriguing and informative. Velástegui’s sensitive descriptions of humans with a variety of deformities and odd conditions is commendable, as is her condemnation of their abominable treatment in nineteenth-century sideshows. Lucia Zárate should appeal to people interested in the human psyche, and those drawn to history should appreciate the author’s adherence to carefully researched historical details. Also, young adults with sophisticated vocabularies should enjoy this book. 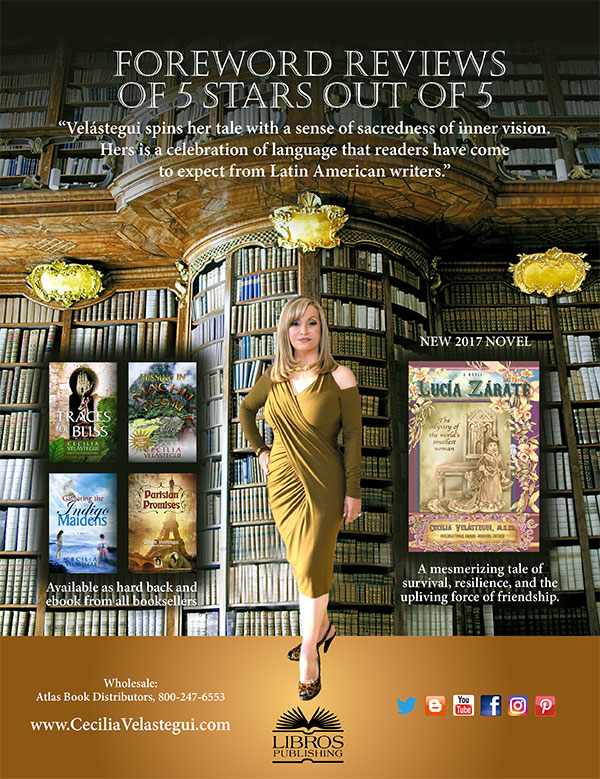